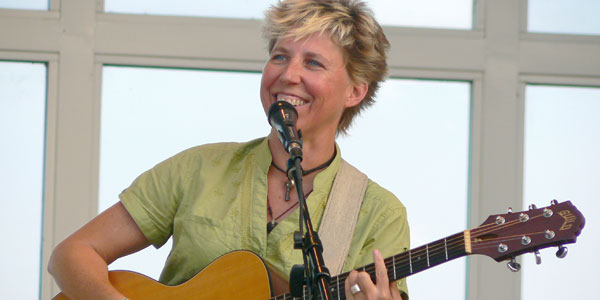 “She’s a one-woman show that shows you only need one woman”. Lojo Russo has been making music along the ‘Big Muddy’ for most of her life. Born in California she likes

“She’s a one-woman show that shows you only need one woman”.

Lojo Russo has been making music along the ‘Big Muddy’ for most of her life. Born in California she likes to keep the river to her East and currently calls the Quad Cities (IA) home – performing mostly as a solo touring artist. But, most of her childhood and early adult years were spent in and around the Twin Cities (MN) music scene.

Self-taught on guitar and voice Russo spent her formative years in different bands in the Twin Cities (MN) playing guitar, bass and mandolin in all sots of folk, funk, jazz, jam, Irish and indie bands. The range of genres gave her a broader understanding of the music she played and a deeper understanding of the music she wanted to create. Those early years earned Russo a nomination for a “Mammy” (MN Music Award) for “Best Folk Artist” and the title of “Best Female Artist” from MN Women’s Press.

To look at her history it’s no wonder Russo likes to keep the music flowing along wherever it takes her. Russo’s musical style is as varied and unexpected as the river she calls home. One moment she’s laying down a furious rhythm on the guitar punctuated with a wailing vocal the next we’re floating along carried by intricate finger-picking, her voice as intense and haunting as her lyrics.

Performing is her passion and the road is a long, strange, wonderful trip full of promise and adventure. Whether playing festivals or front steps, coffee houses or concert halls Lojo Russo connects with her audience in a way few performers can.